Both harmonized and year-specific variables are regionalized, meaning units with less than 20,000 people are combined with neighboring units for confidentiality purposes.

The basic set of geography variables for any IPUMS country includes the following (using Mozambique as an example):

Creation of spatially consistent geography and year-specific geography involves a series of processes:

A more detailed description of the geographic harmonization process is provided in our working paper. 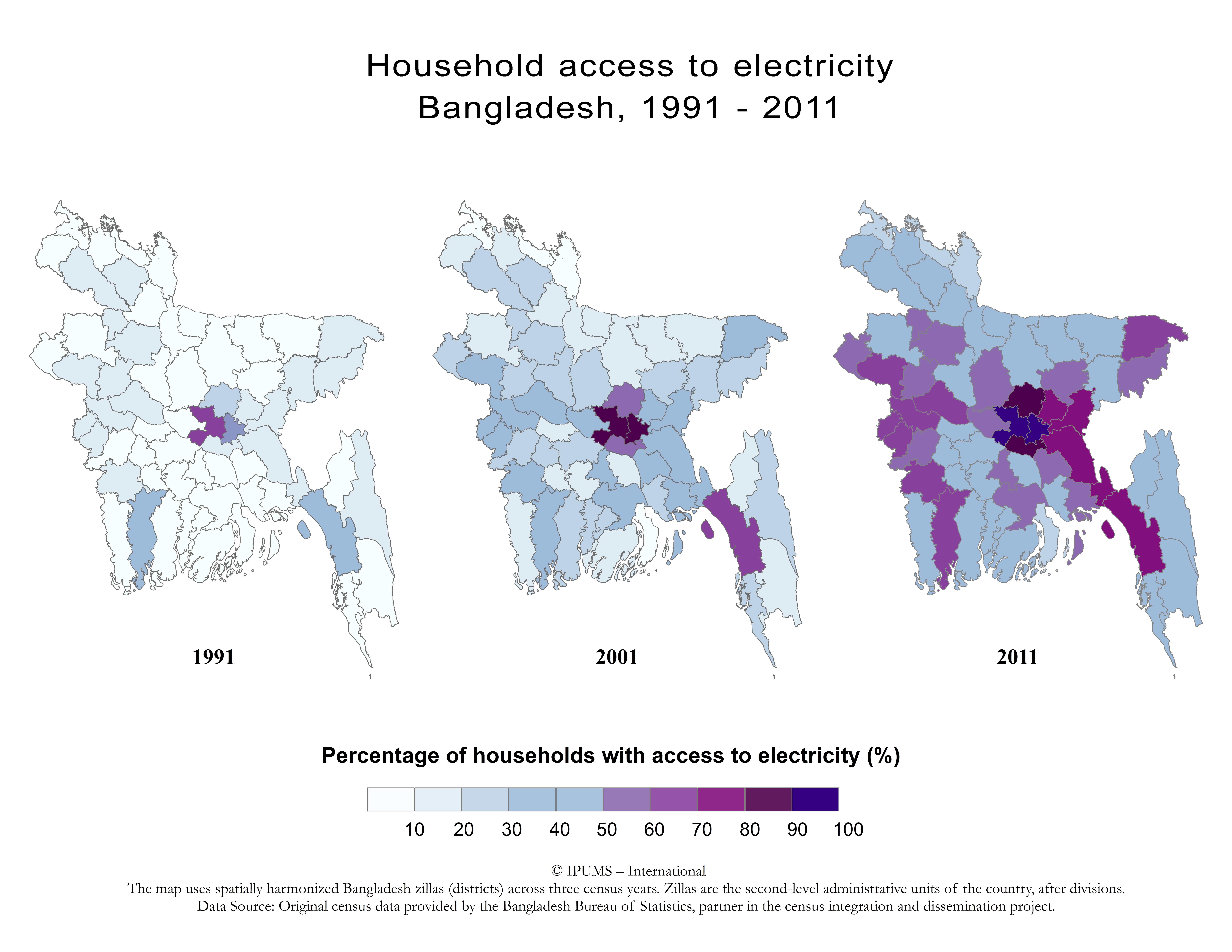 These maps show the percentage of households in Bangladesh with access to electricity in three census years: 1991, 2001 and 2011. The IPUMS integrated household variable "ELECTRIC" is summarized for second-level geography, zillas (GEOLEV2). The base map uses the IPUMS harmonized boundary file that provides consistent geographic units for cross-year comparison of census microdata. Nationally, there was a 40.2 percent increase in household access to electricity between 1991 and 2011. However, disaggregation by zillas reveals significant regional disparities. The greatest increase occurred in major urban centers, particularly zillas surrounding the capital city Dhaka (central part of Bangladesh) and the port city Chittagong (south-east corner). Between 1991 and 2011, Munshiganj (south of Dhaka), Gazipur (north of the Dhaka) and Fendi (north of Chittagong) experienced an increase of 76.5 percent, 60.6 percent and 60.7 percent, respectively. However, Lalmonirhat and Panchagar zillas (both located in the far northwestern tip) saw only an average increase of 12.5 percent. Less than 25 percent of households in the two zillas had access to electricity in 2011. 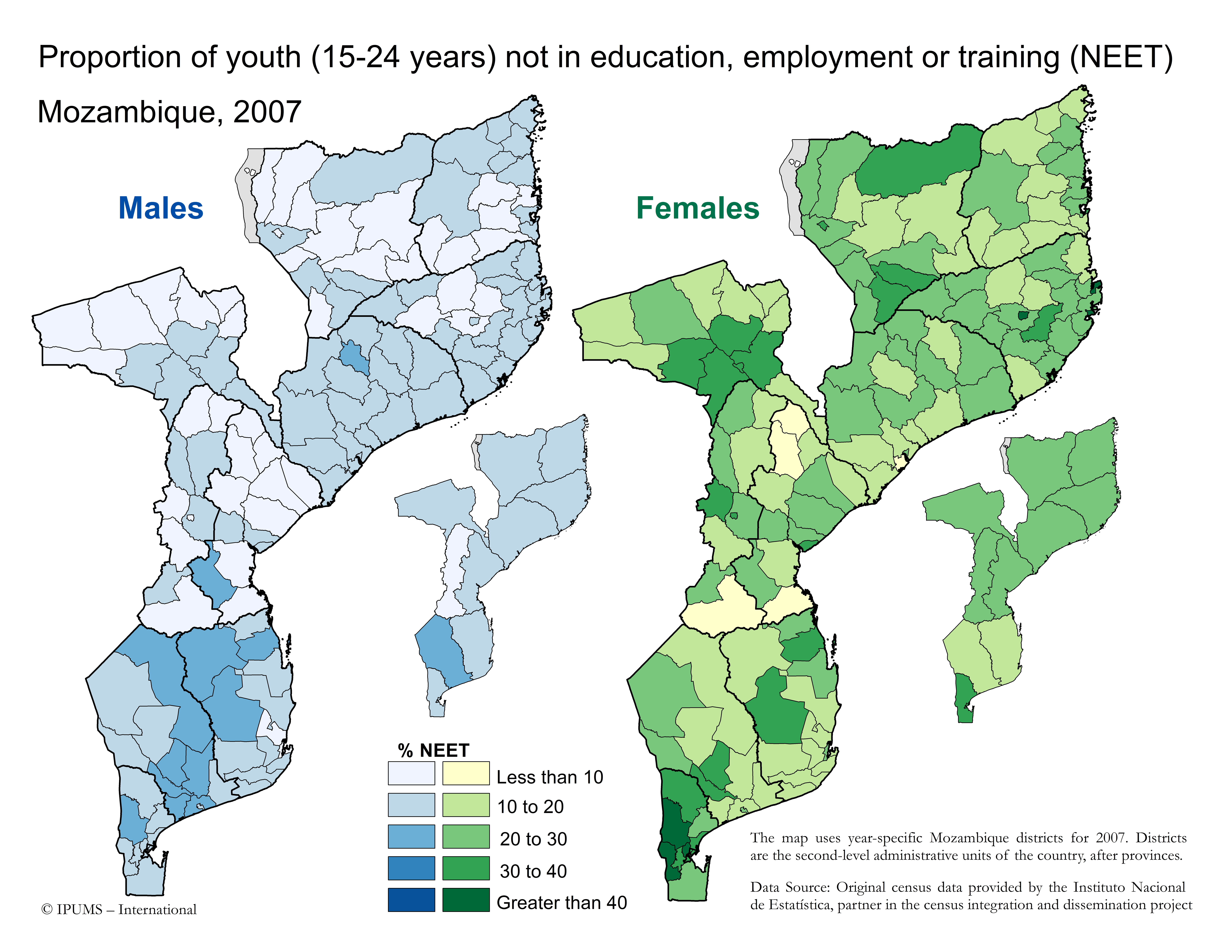 These maps show the proportion of youth (age 15-24 years) who were not in education, employment, or training (NEET) in Mozambique 2007. NEET is disaggregated by gender and by first and second levels of geography using IPUMS integrated variables school attendance "SCHOOL" and employment status "EMPSTAT". In Mozambique in 2007, 19.6 percent of youth age 15-24 were not in education, employment, or training. Disaggregation by gender and administrative unit identifies enclaves of high NEET, particularly among females. Gender disparities exist throughout the country, but are particularly pronounced in the capital region of Maputo (southern tip of Mozambique) and in the urban center of Tete in the northwest. NEET among young men is concentrated in the province of Gaza, where male employment levels are the lowest in the country. Among young women, high levels of NEET are evident throughout the country. There is parity in labor force participation at the national level, but much lower levels of school attendance for young women (27.6 percent) compared to young men (45.3 percent). 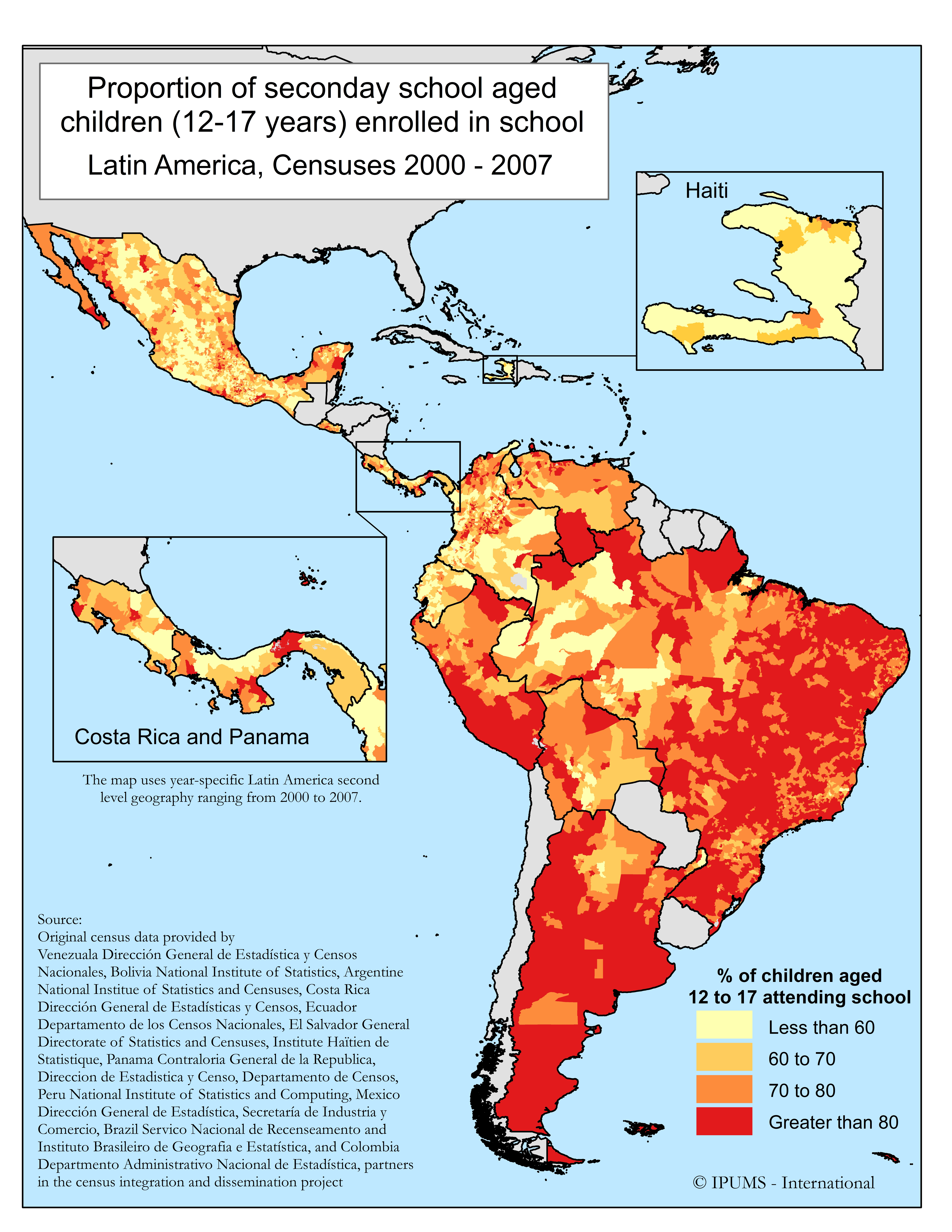